Come and see the beautiful sights and learn more about the Navajo culture.

The sky darkens with clouds. Thunder rolls, lightning flashes and then the rain pours down. It is the male rain. The female rain, on the other hand, is gentle, with a soothing effect. In Navajo belief, there is a male and female to all things above, below and around us. To Navajos, rain is one of the four main elements of Earth; light, air and pollen are the others. It is said by wise ones that if you have no respect for the rain, and your thoughts and words are bad while it rains, the sacred forces will punish you. The Navajo have a ceremony that restores harmony and balance with nature.

Many Navajos still use a traditional cradle board to keep their babies safe and protected. Made with cottonwood, pine or cedar laced together with thin strips of leather, the cradle boards feature a wide, wooden hoop over the baby's head that protects the child. Navajos believe the flat boards will give the baby a strong, straight back, and that a soft supporting pad will help the infant form a nice, rounded head. The cradle board is blessed with corn pollen, prayers, songs and good thoughts for the baby.

Corn is one of the main staples of Native American life. It's an important food item, and every spring, many Navajo families plant large fields of corn. But its use goes far beyond just nutrition — it's also an important part of Navajo prayer. The pollen of the corn is dusted off the tassels and used in ceremonies as a blessing, and is offered in prayer. Corn is used to make many traditional dishes, including kneel-down bread, blue corn mush, dried steamed corn and roasted corn. The corn is also used during a ceremony when a Navajo girl comes of age — a large corn cake is cooked underground in a circular pit lined with corn husks.

Used in religious ceremonies at traditional Navajo weddings, the woven wedding basket has a distinct pattern of representation. The edge of the basket, a lighter color, represents the brightening skies as dawn approaches. The center design features four points to represent the Navajo's four sacred mountains, and the opening into the center (which Navajos believe should never be pointed downward) signifies an outlet for our thoughts. The bright red weave is the hallmark of sunshine, and is a blessing for Navajo health and spirituality. Black is for darkness, and a time to rest our bodies and minds. The lacing of the weave around the basket's edge represent our roots and human life. And the very center of the basket is representative of the emergence of the Diné, the opening for the First Holy One to come into the first world. 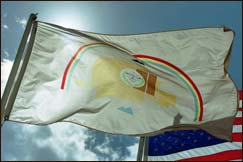 The Navajo Nation Flag, designed by Jay R. Degroat, a Navajo from Mariano Lake, New Mexico, was selected from 140 entries, and was officially adopted by the Navajo Nation Council on May 21, 1968 by Resolution CMY-55-68. On a tan background, the outline of the present Nation is shown in a copper color with the original 1868 Treaty Reservation in dark brown. At the cardinal points in the tan field are the four sacred mountains. A rainbow symbolizing Navajo sovereignty arches over the Nation and the sacred mountains. In the center of the Nation, a circular symbol depicts the sun above two green stalks of corn, which surrounds three animals representing the Navajo livestock economy, and a traditional hogan and modern home. Between the hogan and the house is an oil derrick symbolizing the resource potential of the Tribe, and above this are representations of the wild fauna of the Nation. At the top near the sun, the modern sawmill symbolizes the progress and industry characteristic of the Navajo Nation's economic development.

Great Seal of the Navajo Nation

The Great Seal of the Navajo Tribe, designed by John Claw, Jr. of Many Farms, Arizona, was officially adopted by the Navajo Tribal Council on January 18, 1852, by resolution CJ-9-52. The 48 projectile points outlining the seal symbolize the Tribe's protection within the 48 states (as of 1952). The opening at the top of the three concentric lines is considered the east; the lines represent a rainbow and the sovereignty of the Navajo Nation. The rainbow never closes on the Tribe's sovereign immunity. The outside line is red, the middle is yellow and the inside is blue. The yellow sun shines from the east on the four mountains sacred to the Navajo. These, located at the cardinal points, are in their ceremonial colors: White in the east represents White-Shell Woman; Blue in the south represents Turquoise Woman; Yellow to the west represents Abalone Woman; and Black to the north represents Jet Black Woman. Two green corn plants, symbolic as the sustainer of the Navajo life, decorate the bottom of the seal, with tips of the yellow pollen which is used in many Navajo ceremonies. In the center are a sheep, a horse and a cow, all symbolizing the Navajo livestock industry. In May of 1988, the Navajo Nation Council amended the original wording from the Great Seal of the Navajo Tribe to the Great Seal of the Navajo Nation. They also increased the number of arrowheads to 50 to include representation of the states of Hawaii and Alaska.

Book a Room with us